Nearly all companies, whether it is small or large, use sequels. They use the sequel to manage, update, maintain, and control the database. Service providers with large subscriber bases, such as Spectrum internet, are particularly stringent about this. However, in this blog, we will explore sequel programming languages, methods, uses, and scope. Thus, keep scrolling to know more about Sequel Programming languages.

So, let’s start with the definition of a Sequel.

What is a sequel programming language or SQL?

Formerly SQL is known as SEQUEL (Structured English Query Language), which depends on its unique language known as SQUARE (Specifying Queries As Relational Expressions). This coding language, SEQUEL, was later called SQL by leaving the vowels as SEQUEL was a brand recorded by the Hawker Siddeley aircraft corporation.

Information is a central component of various mobile apps and web applications. For instance, an application such as Facebook has its user’s profile details, involving details about their posts and friends. A database system is used to support this information. SQL is a coding language that allows coders to manage data.

Methods to use sequel programming languages

When an application can be coded in a language such as PHP, Python, or Ruby, the database can not configure to know these. Historically, the database can know only SQL. Due to this, studying SQL is essentially a necessity when a learner means to operate in-app development or web development.

Just like other coding languages, sequel programming languages have their markup. It offers the importance for a coder to study SQL markup norms before practicing them efficiently. Besides markup languages, another characteristic different from database coding is the theory of tables. A database might be expressed as several tables. Every table holds its amount of rows and columns and describes a set of information.

Create a library. One can design a database, which saves details related to books inside the library. In this example, one requires only a single table. This table enables users to keep all the necessary data that one requires.

Some of the commonly utilized sequel programming languages or SQL commands that one requires to understand for database working. While operating with databases, a coder may compose commands like:

These commands are commonly used for a table. The more complex the database exists, the more commands a coder will require to use. This command is practiced while writing inquiries–queries, which enable users to manage information in databases. When a programmer enters these commands mentioned above in a specific database system, the operation represents these commands and performs them accordingly.

Here, we have mentioned some immediate examples:

The initial query is capable of generating a unique database. For instance, an app, such as Facebook may include databases for several of the following:

The next query is capable of generating a new table within a specific database.

Online video streaming apps, like Hulu, Netflix, etc., use databases to track which television shows and movies are available and your viewing interests and preferences. For example, Hulu uses Apache Cassandra, a NoSQL distributed database, because of its scalability, availability, and performance. Through this, it can provide you better-watching recommendations every time.

SQL is made with the help of statements that start with keywords or commands. For example, CREATE and finish with a semicolon.

Another example of SQL language elements are the following in the picture. 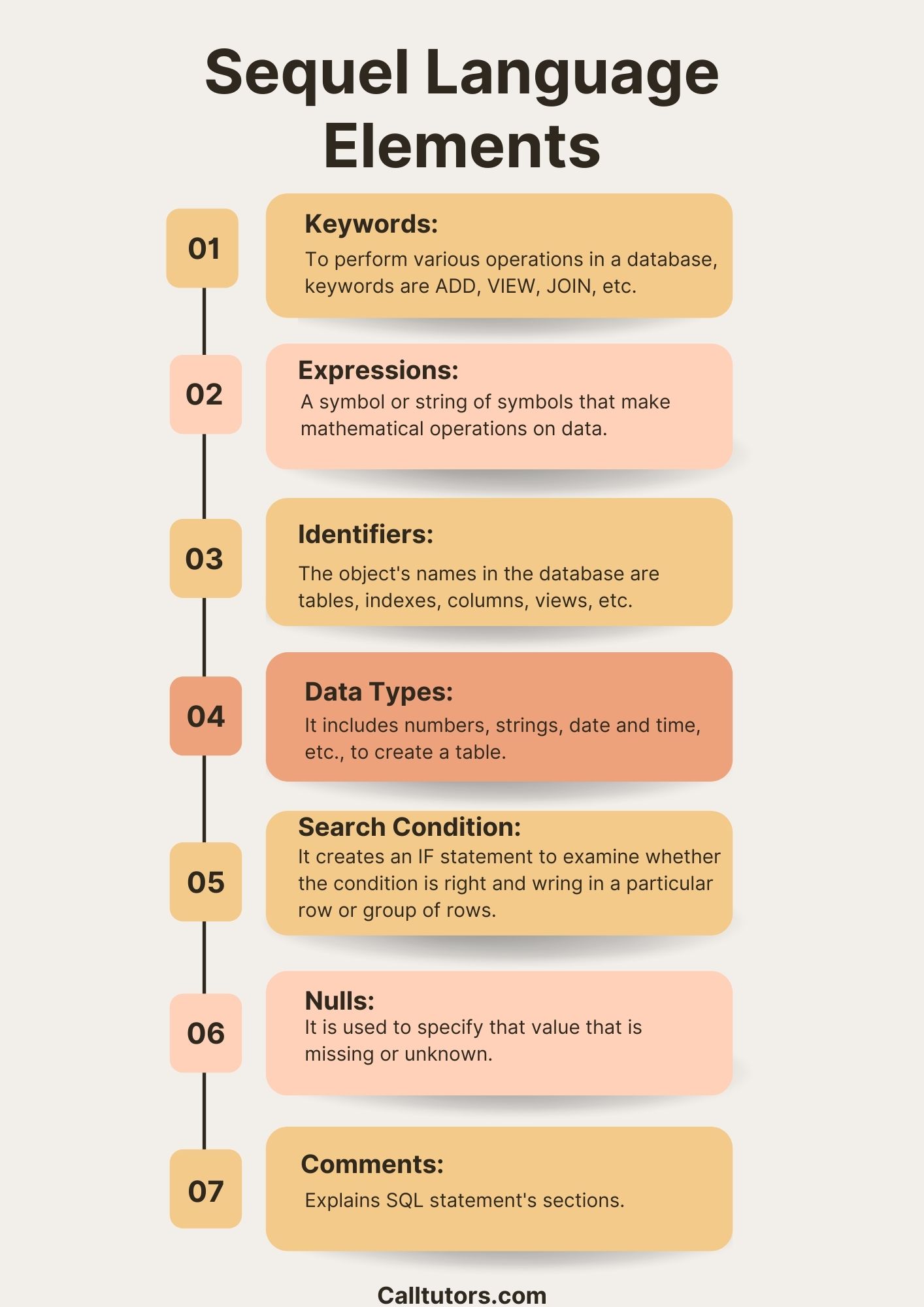 What is the use of sequel programming languages?

A database practice with technology is present in nearly every field where essential quantities of information are included. Let’s check some businesses that most usually practice SQL.

In the finance business

Behind specific purposes is an involved database. It includes banking statements and payment processors like Stripe shop and complete financial transactions and users’ information. Moreover, various bank databases have additional safety specifications that request for the most significant levels of risk agreement within the SQL or sequel programming languages are used.

It includes various data processing. Multiple apps, such as Snapchat and Instagram, use SQL. Sequel programming languages save a user’s outline data like location and bio. A program generates a post or gives a photo and stores messages sent from a user to another to improve these app’s databases; that is why the programmer recovers the information to see them again.

This language is being practiced to encourage the database. This software operates a version of SQL from these social networks on the cellphone to the apps on a computer. With this universal applicability, one can understand why these databases’ coding language is valuable in a developer’s instrument area.

In this blog, we have learned all the relevant information about sequel programming languages. This coding language is known as SQL, used to create tables and other things that help store information. These tables can be generated by various commands that are mentioned above. Besides this, this coding language is used in multiple industries to save the database. Therefore, it is beneficial to use and learn SQL to become a developer. If you have any problems regarding your programming and any other assignments and homework, you can ask for our experts’ help. Get the best SQL homework help from the experts.

What is a SQL API?

SQL API permits you to interact with your data and tables as though you were running SQL statements against an ordinary database. You can utilize the SQL API to insert, delete or update data, or to choose data from public tables to utilize it on your site or application.

Is SQL useful for jobs?

SQL is one of the widely used programming languages on the planet, and if you learn SQL language, you open up some ways to finding new work and business opportunities.

Is MySQL free to use?

MySQL is free & open-source software under the provisions or terms of the GNU General Public License and is likewise accessible under various exclusive licenses. MySQL was possessed and supported by the Swedish organization MySQL AB, which was purchased by Sun Microsystems (presently Oracle Corporation).

What are the main data types of SQL?

There are several websites that help you with your C programming assignment help. But the most important thing is that…